Which cities sell the most liquor?

Are some cities better served than others?

Where is the most under served city that we can open up a liquor store and compete?

This was our table data headers:

This was our new table:

Exploratory Data Analysis is performed to analyze the data for skewness, as well as build predictors for the target variable.

Bottles Sold, Sale (Dollars) are skewed. Plotting Histograms show that we should to restrict to Bottles Sold per transaction to 25 and less. This will eliminate outliers. 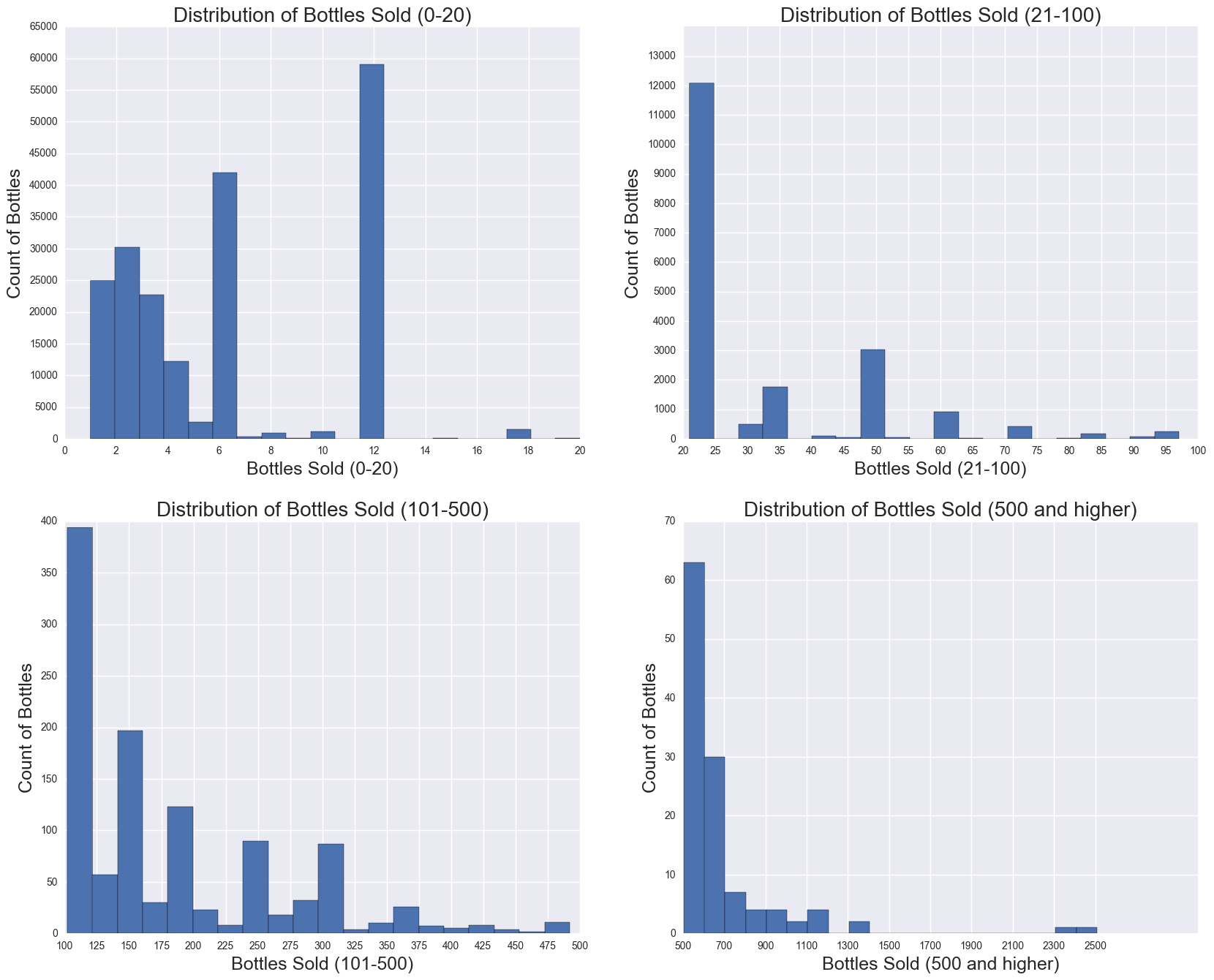 By creating unique items per store, we can use it as a proxy for store size, which will one of the predictors used in the regression. The histogram for unique per items shows that it is skewed. 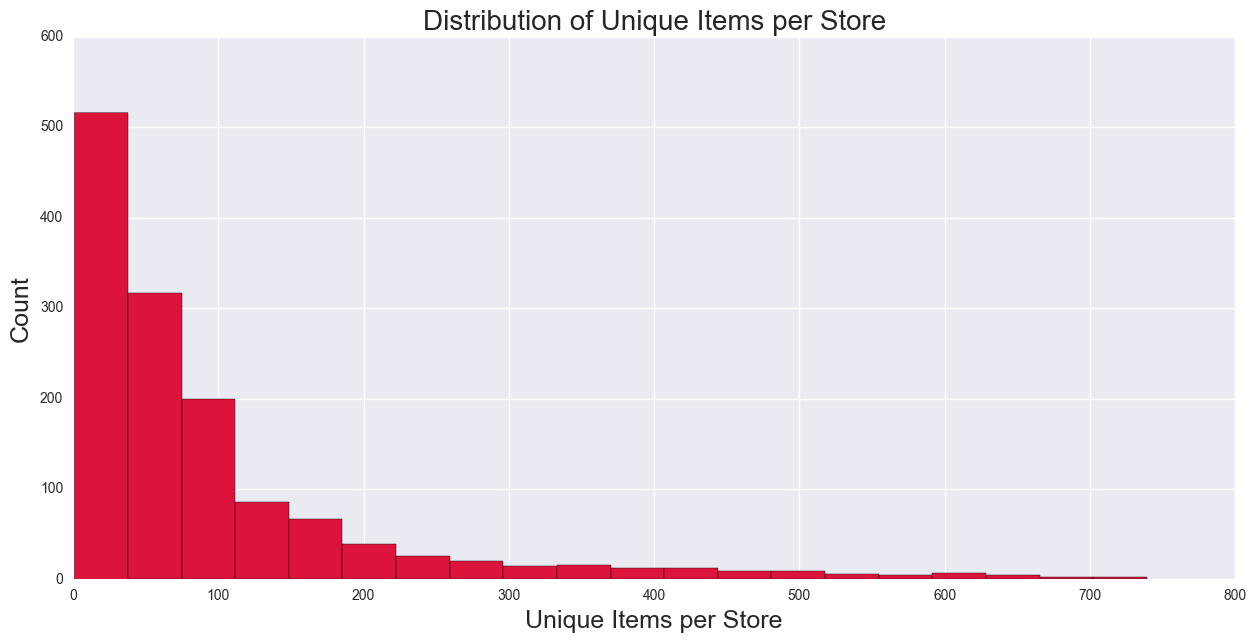 Calculating the Number of Stores per City, which will be used for number of competitors as a predictor in the regression. From the histogram, the distribution is heavily skewed.

Average Items per Store per City

Calculating Average Items per Store per City and Sales per Store, which will be used later in merges. Histogram shows that there is a skewed distribution. 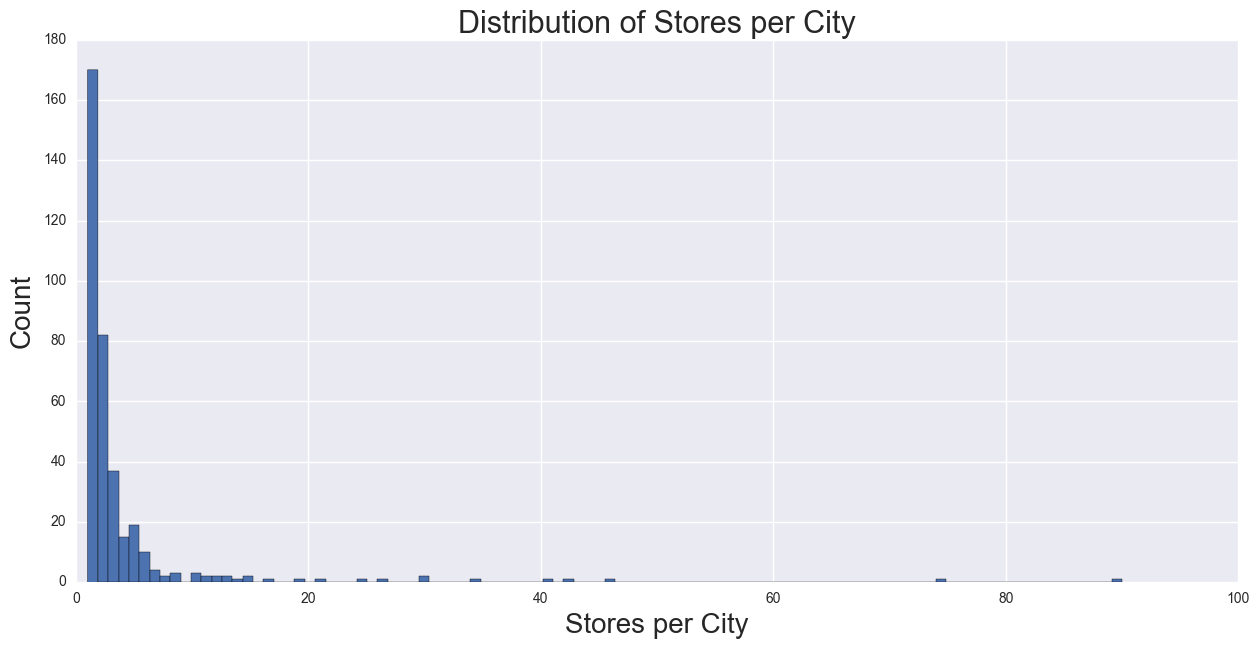 Starting from the df (original) dataframe, and merging with various dataframes created prior, a dataframe is created to build metrics to be used as predictors for the regression, which are the following:

These predictors will be created from the df dataframe as well as external sources. The code below is the process for constructing these predictors.

From the distribution of the histogram, Population by City is heavily skewed. 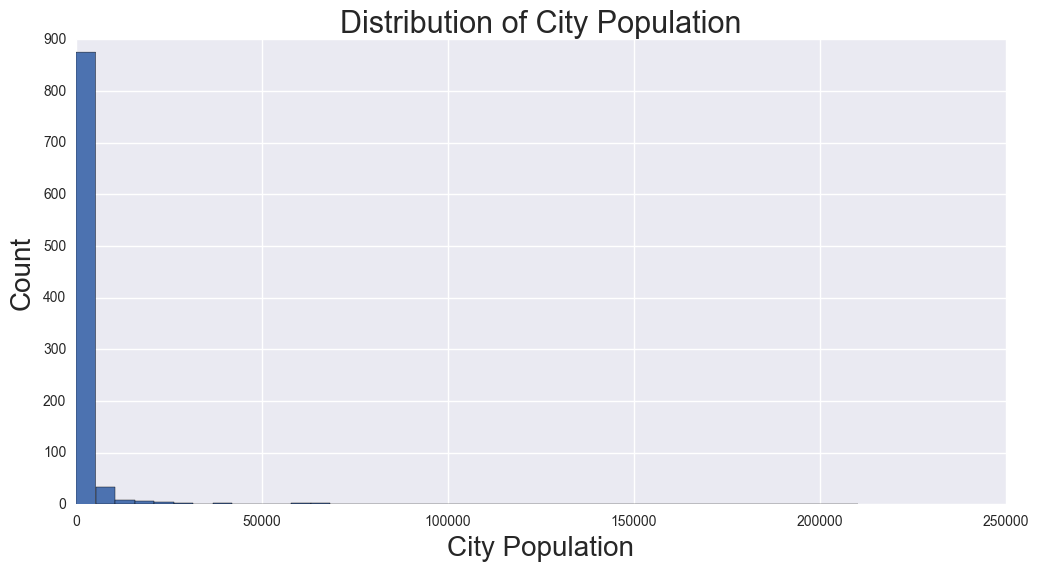 Taking the log normalizes the City Population Values. Predictors will be transformed by taking the log in the regression. 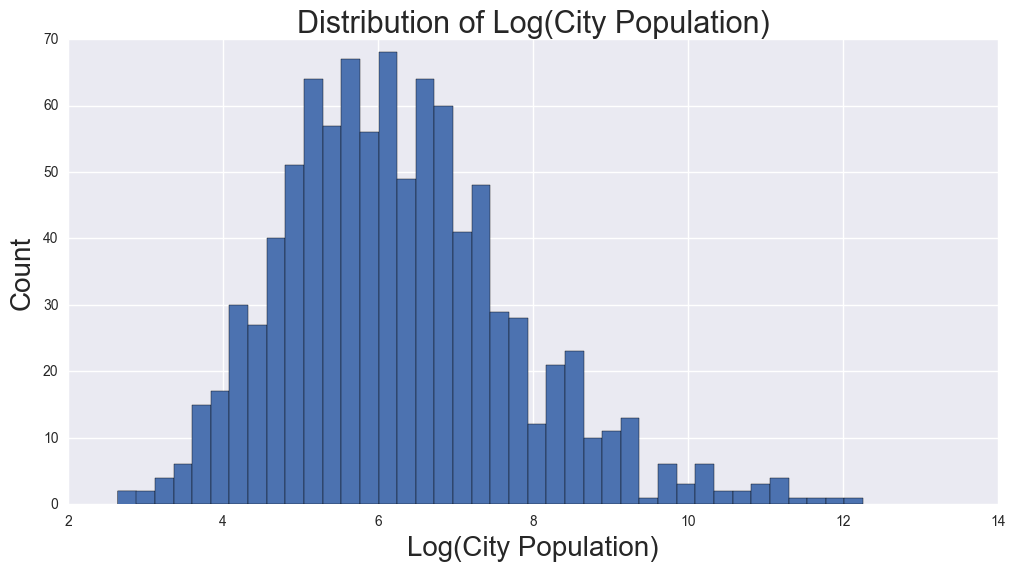 Categorizing the types of Liquor in the Data

By Categorizing the store name by whether it is a Liquor, Grocery, or Other, we can analyze the type of stores for the top 10 markets.

Bringing in County-level Per Capita Yearly Income, to be used as a predictor for the regression. This distribution is still skewed, but less than other predictors. 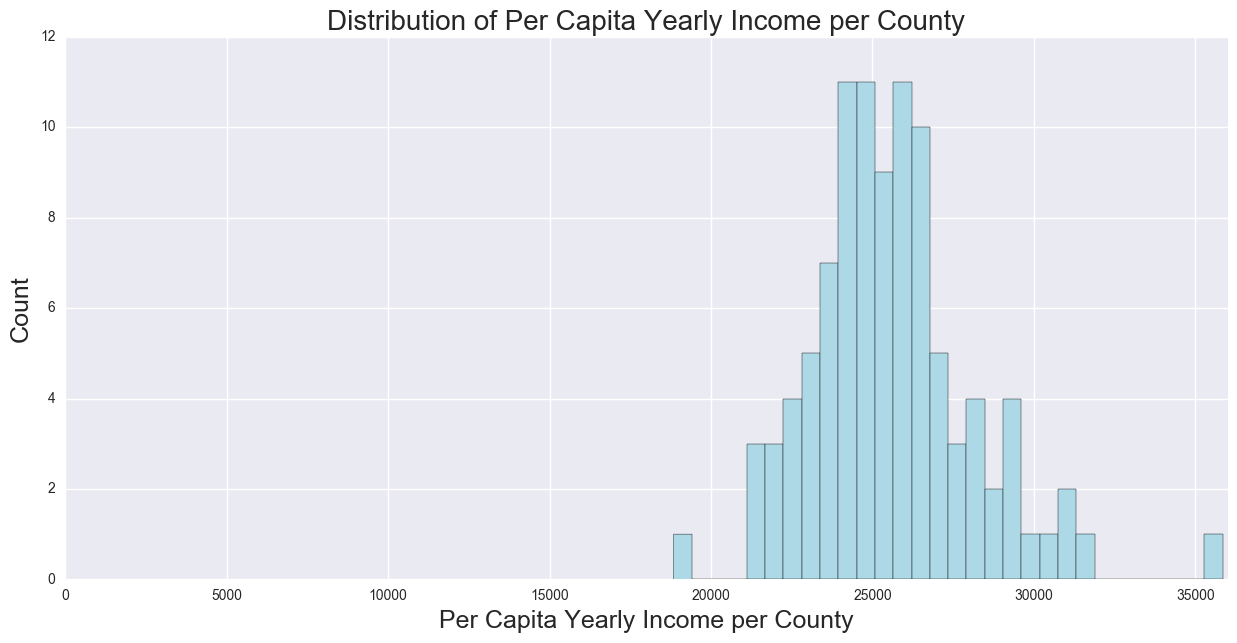 The dataframe will be constructed to get the target (df_y) and the data for the predictors (df_X), which will then be split into train and test sets. The target variable is Bottles Sold. The predictors that will be used are the following: Target Variable: Yearly Bottles Sold (per each Store) Predictors:

Assumptions and Constraints: Linear Regression will be peformed on the training set, which will then be used to predict Bottles Sold. Before the regression is performed. Both the target and the predictors will be log-normalized because of the skewness, as shown in the histograms earlier.

Our regression showed the following: 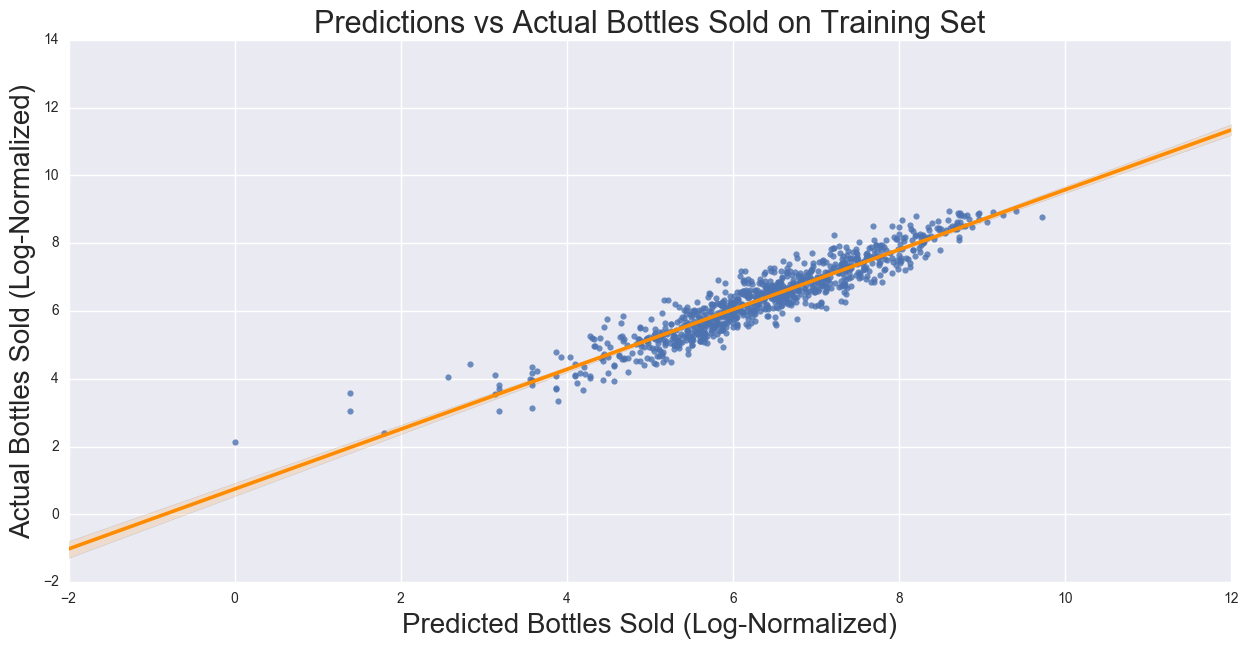 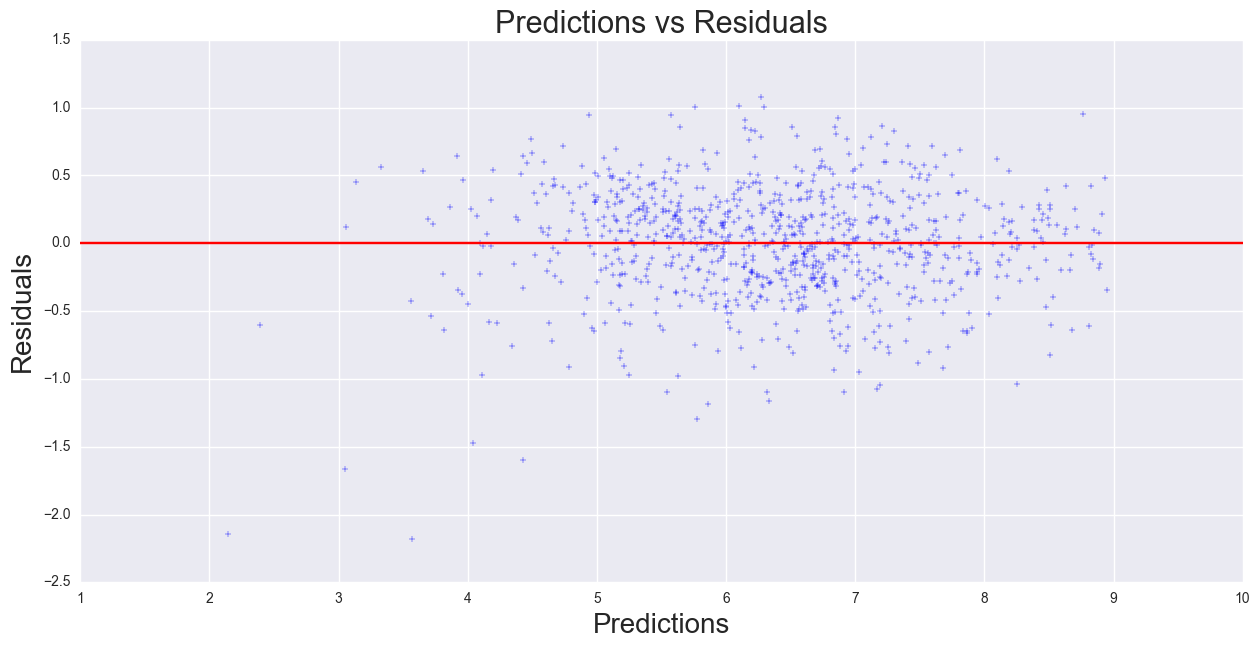 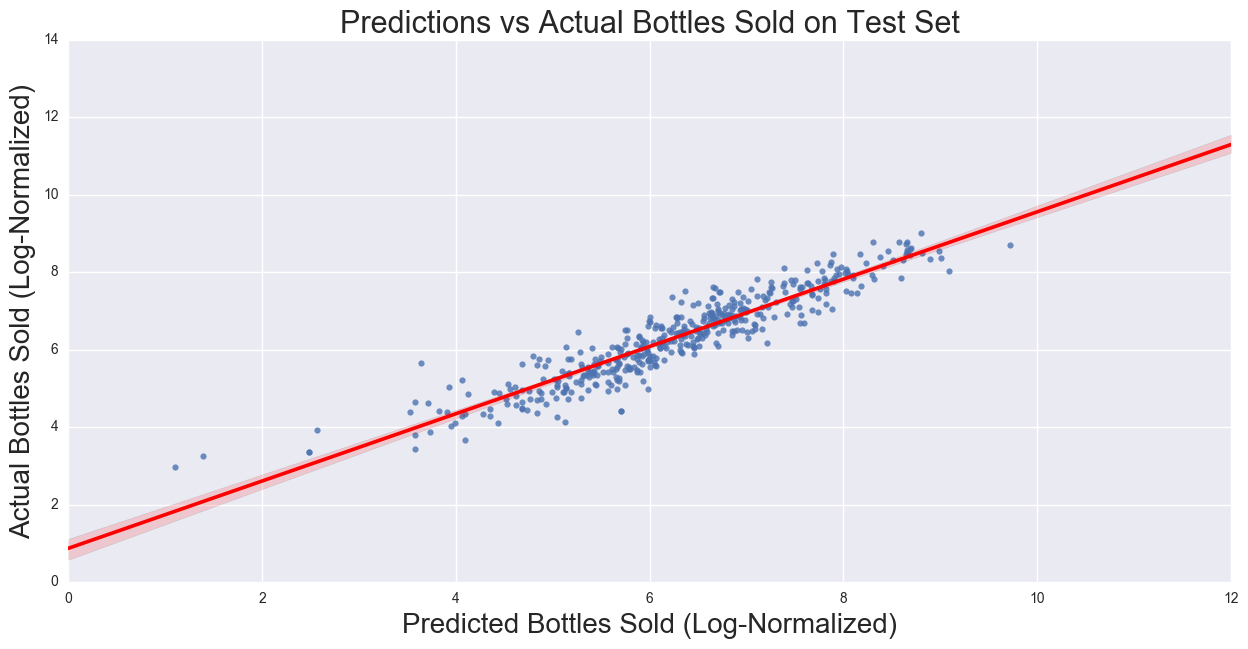 Analysis of the Results

The correlation on the training dataset is 0.88. The coefficients for the regression show the strongest predictor is Unique Items (positively correlated), followed by Average Price (negatively correlated), Stores per City/Number of competition (negatively correlated), and Population and Per Capital Yearly Income (both positively correlated). These relationships are what we expect to see: the number of items in a store would show that more available products to purchase, and as the number of competitors in the city as well as price should decrease the bottles sold. Population and Income should be positively correlated as the more people are in a city, the higher demand should be, and the more disposable income a person has, the more the person is able to spend on liquor. If the assumption of the Yearly per Capita Income is uniformly distributed across all cities in the county does not hold, then there would be a stronger bias, which requires city level Yearly per Capital Income.

What happens if another store enters the market? Assuming Quantity (Bottles Sold per City) and Avg Price does not change (also means Total Sales (Dollars) per city does not change), if we increased number of stores per city by 1, we can calculate the new AvgSales with entry of a new store. Sorting from highest to lowest, we will find top 10 cities as consideration for markets to expand.

Once we know which markets to enter, we can find the average number of items among the competitors,types of competitors, and also the items and prices to which we place in the store. 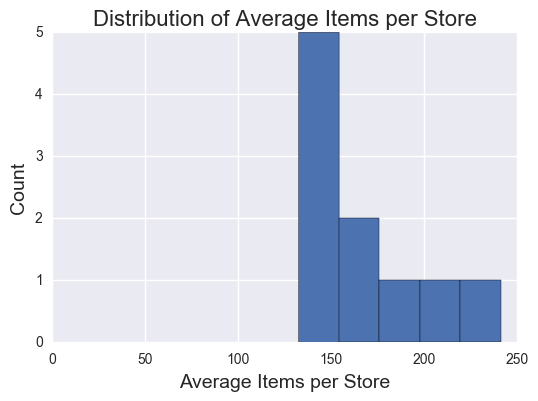 The cities above are either subarbs (Windsor Heights, Bettendorf, Coralville), college towns (Mt. Vernon, Iowa CityCedar Falls, or near a resort/lake (Spirit Lake, Milford, Mason City). Categorizing the Category Name to bins of liquor types, we can find the ideal mix of inventory using the average items per store, which was calculated above (164 items per store) Evaluating the Predicted Sales (Predicted Bottles * Avg Price), we can re-run the same process to evaluate top 10 cities for Predicted Sales. Below, there are 7 Cities that are in the list above:

Three new cities are in the top 10: Given these two lists, it is recommended that these Cities be evaluated further for possible new location due to proximity colleges and distance to major cities:

Earlier, we created category bins to be used for our portfolio. We then further categorized each liquor type into broader genres (Vodka, Whiskey, Rum) rather than specific brands (Grey goose, Jack Daniels, Captain Morgan).

Vodka, Whiskey, and Rum are the top 3 types of liquor. The average items per store for top 10 is 164. Assuming this would be the size of the store, lets multiply the percentages times 164. The ideal mix of liquors, assuming 164 items per store,for a new store should be:

Plotting the impact of a new store location

We created a barchart of Fraction of Stores that are Liquor Stores by City for the top 10 cities. 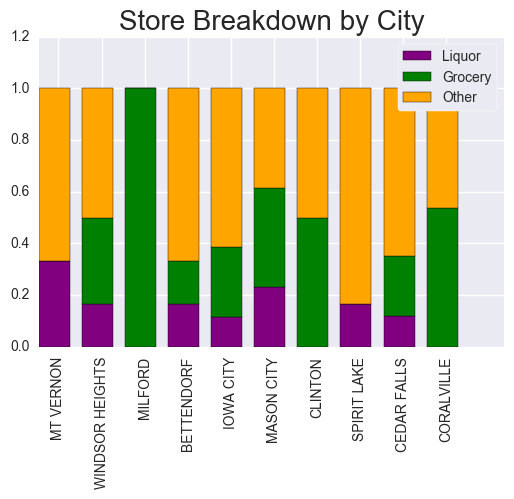 Then we plotted the popularity of liquors by category. 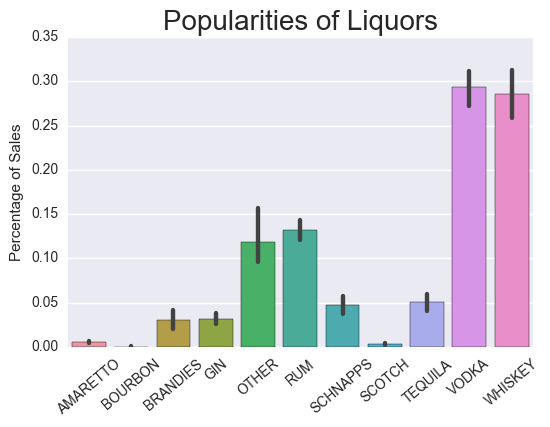 Finally, we plotted the impact of entering the market in each of the top 10 cities. 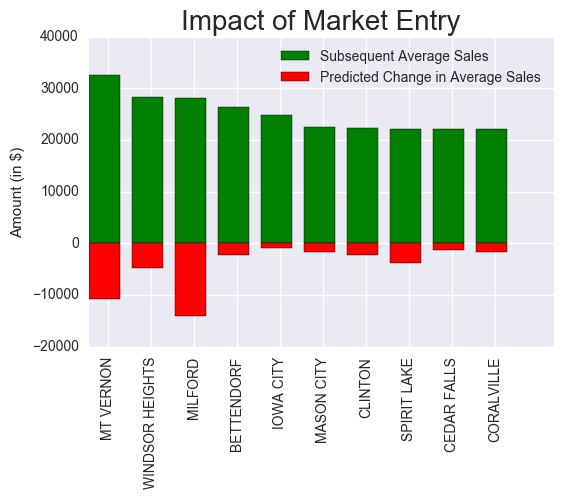 Given the 10% random sample of the Iowa Liquor Sales, the log-normalized Linear Regression Model was used to fit the data to the model. Using the yearly Bottles Sold per each store as the target variables, the predictors Unique Items per Store, Stores per City, Avg Price, Population, and Income were used to fit the model. The correlation and MSE of the data was 0.88 and 0.17, respectively. The model was then used to predict on the test set, and comparing actual Bottles Sold to predicted Bottles Sold 0.87 and 0.19, respectively.

Top 10 Cities are recommended using Average Sales per number of competition, which is stores per city. Since we are interested in the scenario where a new store enters the market. We add 1 to the stores per city and divide Avg Sales by this number. Also assumed was that avg price and bottles sold per city were constant. The following cities are recommended for new markets for a new store location: Mt Vernon, Windsor Heights, Milford, Bettendorf, Iowa City, Mason City, Clinton, Spirit Lake, Cedar Falls, and Coralville. Using the types of Liquor sold (binning them into types), the ideal mix of products to be sold was calculated, which is based on the aggregate of top 10 cities.

Further Analysis can be performed on the brand and size of each type of liquor, as well as the optimal price based on calculated price elasticities.

Hope you enjoyed following along :)